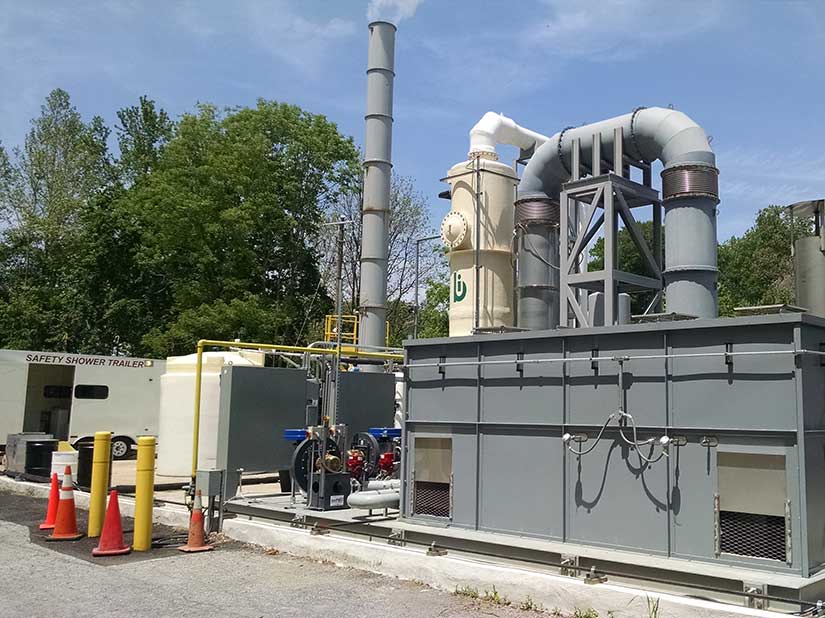 A stream isolation/groundwater extraction and treatment system (GWTS) is in operation at the Galaxy-Spectron Superfund site, a former solvent recycling facility. A large industrial PRP Group is responsible for environmental compliance and cleanup, under US EPA and state regulatory oversight. Uninterrupted system operation is required to keep contaminated groundwater from reaching an adjacent stream. Groundwater is passively collected in a series of sumps connected to perforated piping located beneath the stream liner. The groundwater collected in the sumps is pumped to the on-site GWTS, which was designed to process groundwater at a flow rate of 50 gallons per minute.

Upon assuming management of GWTS operation, maintenance, and monitoring (OM&M) responsibilities, GES’ engineering and field support team evaluated the system to identify opportunities for optimized performance and lowered operating costs. Following a thorough inspection, the team conducted testing and modeling of system processes at various flow rates. GES identified treatment components (i.e., powdered activated carbon treatment bioreactors, or PACT units) that added to operating costs but were not adding to system performance. Subsequently, GES planned and managed the construction of system improvements, including a rerouting of groundwater through the system and installation of piping on the roof of the treatment building to facilitate off-gas odor controls, approved by state and federal regulators as an appopriate alternative to off-gas treatment. Construction was completed with no injuries to any workers.

As the overall site management strategy evolved, GES implemented system improvements that would accommodate a new technology – thermal conductive heating with vapor extraction, or in-situ thermal desorption (ISTD). Working with the client’s team, GES designed and constructed a new treatment train to address the liquid process streams generated from the ISTD remedy. GES built features into the system design that allowed for flexible modification for future groundwater collection and treatment from a different area of the site.