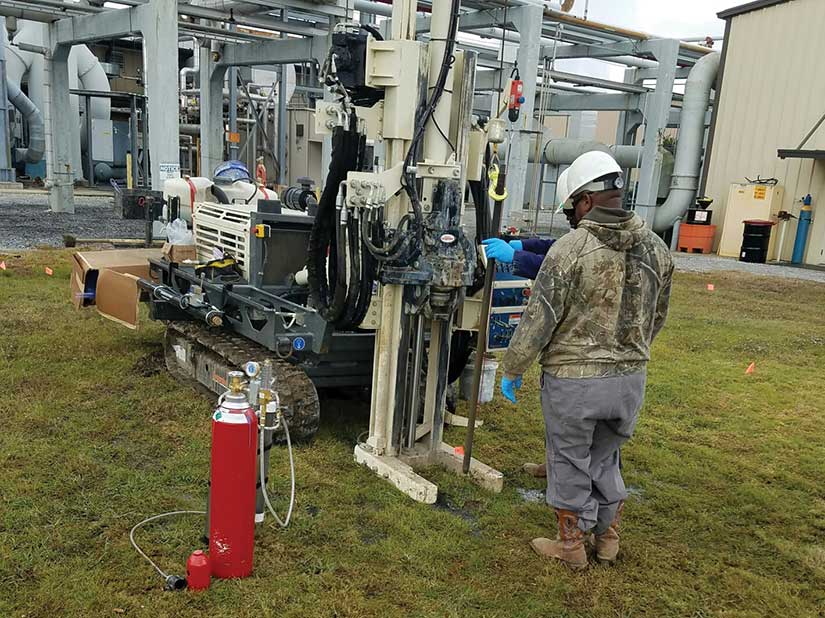 Elevated concentrations of chlorinated volatile organic compounds (CVOCs) in soil remained in a former perchloroethylene (PCE) and trichloroethylene (TCE) storage area at a former chemical manufacturing plant. Achieving regulatory closure for this area of concern (AOC) under the RCRA Corrective Action program, with no further action determination in this AOC, required a targeted soil cleanup. GES was retained to evaluate potential remedial solutions and to implement a technical and cost-effective alternative.

A strategy was devised to utilize an enhanced reductive process – utilizing in-situ chemical reduction (ISCR) with enhanced in-situ bioremediation (EISB) – to address the chlorinated impacts to unsaturated soils in the upper 15 feet. The injection process included, first, combining a mixture of reactive metal particles, calcium carbonate, and nutrients in glycol with water and emulsified vegetable oil to create favorable conditions for anaerobic bioremediation. This was followed by application of an enriched bacteria culture of dechlorinating microbes and compressed nitrogen to help disperse the culture in the subsurface without introducing oxygen.

Feasibility pilot testing was first conducted in two test areas with injection into three different vertical zones. Injections were completed via direct-push technology with careful monitoring of injection pressures and flow rates. Feasibility testing demonstrated that the ISCR reagents and bio culture could be successfully delivered into the subsurface and that target CVOCs could be reduced using this technique.

A reduction in CVOC concentrations and genomic data indicated that both reductive biotic and abiotic pathways were occurring, with the most significant reductions of chlorinated ethenes (PCE and TCE) and carbon tetrachloride (a 99% reduction achieved). These results pointed to this single effective remedy as a viable solution throughout the impacted soil zones. Following regulatory approval, full-scale ISCR/EISB remediation was planned and implemented over multiple injection events. Soil quality at the site is currently being monitored to assess the short- and long-term success of the full-scale remedy.